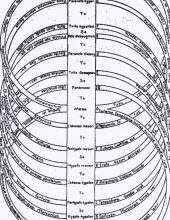 An Experiment in Musical Magic

The creation took place in June 2016 during the International Organ Festival Nürnberg.

At the end of the 15th century, a new musical genre was created, the so called Chansons de Regretz, “regretz” meaning tears, mourning and death which are overcome through music. The first chanson of this genre, Gizeghem’s Allez regretz calls upon death just to drive him out. Josquin Desprez composed four such chansons which are interrelated through musical citations. There is a process of enrichment of motives reaching its goal in Plus nulz regretz.

The first of these chansons, Parfons regretz, cites motives from three other of Josquin’s chansons. These citations mention pain and separation. They find themselves incorporated in Parfons regretz but with a new meaning leaving behind the original pain. This aim is realized through the time technique canon: the “old” voice creates a new self. In Plusieurs regretz the canon itself incorporates for the first time the original citations. The title is a reference to the Chansons de Regretz of other composers, Josquin’s being the best ones, though. The 6voice Regretz sans fin is a circle canon which could be sung eternally, a kind of spell to overcome time itself. This chanson develops a new mirror motive which will be the main motive of the final chanson Plus nulz regretz.

The text of this chanson presents a reference to the fourth Eclogue of Virgil singing about the birth of a new Golden Age under the sign of the sun and Apollon. The text has a circular mirror structure which can be found in Josquin’s music also. It is also evoquing the planets and their sounds. In the music we find all the motives and canon techniques of the three other chansons. The spacial distance of the canons can change from octave to fifth or fourth. But here they are not strict, their temporal distance changes miraculously and unpredictably. They create their own spatial and temporal laws. An octave is the center of the piece, its placement corresponding to the number used for calculating planetary distances and orbits. The mentioned mirror motive turns around this axis. It is here that a new time is born, the linear time is left behind and music creates its own cosmos, turning around and octave axis.

The great Florentine philosopher and astrologer Marsilio Ficino (1433-1498) thought to witness a new Golden Age at the end of the 15th century: “This century has brought to new light the seven Liberal Arts and perfected astrology.” Ficino supposed the sounds and connected modes of the planets to send magical energies, intercepted by creative men, reemerging vitalized through the heart and the human spirit. Carried through the air these energetic sounds would then be received by the listener and create magic effects. Thus a universal circle unites the heavenly spheres and human creativity, made audible in music.

Josquin takes this concept one step further. He not only uses the magic potential of the planets and their sounds but he creates a circular energy among four of his own pieces. This energy is getting more and more potent overcoming linear time in the end. This is the birth of the idea of metaphysical time in music finally replacing liturgical time of religion.

Our project will try to “enact” these processes using the method of slow listening and the possibilities of a newly developed surround sound system. In the center of the performance space there will be a vertical sound axis with loudspeakers, e. g. emanating the sound of the octave and the mirror motives in Plus nulz regretz. Other loudspeakers are distributed horizontally realizing circular sounds of the planets above the audience. The modes corresponding to the planets emanate in electronic sounds and are “captured” in the four Chansons de regretz. The system permits to e. g. circulate the two voices of a canon. The voices can be projected and perceived from different directions. The slow building up of the voices (“slow listening”) from the basic canon to the incorporation of the citations to the full version creates new perspectives of understanding. The citations are produced electronically while the sung voices sing around these “energized” motives. Citations from philosophical texts of Josquin’s era elucidate the magical, astrological and philosophical background of the heard processes. The audience witnesses the building of a musical “Tombeau” created by the composer for himself. In the final stage this Tombeau is overcome through musical Magic. Josquin probably thought to live eternally beyond actual performances of this music simply by having created it. Whether the audience will experience this process is left to be believed or not.