As this project has now been very successfully performed we offer a cd of the Mass and a filmed documentation on usb stick!

This is our third great project. Johannes Ockeghem’s (ca. 1420 – 1497) Missa Prolationum can be considered as a sounding philosophy of time. It is one of the most daring and fascinating works in the history of music. It can be compared with works such as Bach’s Kunst der Fuge.

The whole mass consists of mostly two pairs of voices which are conceived as canons. Particularily striking is the fact that all four voices begin sometimes at the same time (as in the first Kyrie which you can hear in the example above). The pitches of the voices are identical but they move in different speed due to the different time signatures (in the terminology of the time: tempus and prolatio). Only after a certain time they do not move further apart due to smaller note values. This conception may be considered as a presentiment of Einstein’s Relativitätstheorie. The titel of our project alludes to the technique of the “fugue” but also to the idea of a technique trying to master the “fleeing” time.
As in Bach’s Goldberg-Variationen (every third variation is conceived as a canon) the interval of the canonic voice grows from unison to the octave.

This mass being an awsome challenge for singers it is rarely sung in concert. For the listener the unique conception of the voices and inherent processes the perception is as fascinating as it is challenging.

The technique of slow listening enables the listener to experience the complicated fabric in a completely new and enlightening manner presenting extracts and details of the work leading to the complete rendering of the full score. The music will be enriched through the recitation of texts from antiquity to our present day dealing with time, perception and music.

The concert was performed by four solistic singers from our ensemble Musica Universalis who have already participated in previous projects of the foundation: 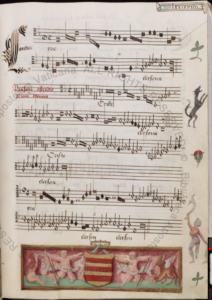 Here you can read the programme notes:

We DO NEED YOUR SUPPORT!

Our projects are realized on a honorary basis. We DO NEED YOUR SUPPORT! Don’t take our valuable work for granted.